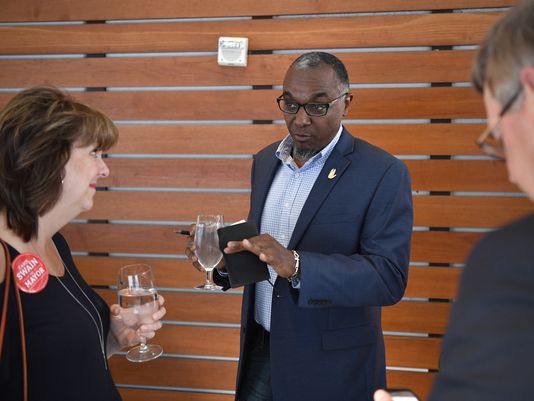 Nashvillians resoundingly defeated a controversial plan that would have raised four taxes to fund a transit system anchored by light trail, voting against the historic referendum by a nearly 2-to-1 margin.

In a crushing blow to much of the city’s establishment that backed the proposal, more than 78,000 Nashvillians voted against the referendum and nearly 44,000 voted for it. It was a margin of about 64 percent to 36 percent.

It was a sweeping rejection, with only five of 35 Metro Council districts, covering parts of East Nashville, Inglewood, downtown, 12South and Belmont, voting for the referendum.

The lopsided outcome, which came from a large turnout of voters, casts major doubt over the future of legacy transit in Nashville — a rapidly growing but still car-dominated community that lacks high-capacity transit like many of its peers.

It also sets up weeks of dissecting to see where things went wrong for the city’s transit boosters, who vastly outspent their opponents but lost overwhelmingly anyway.

“The voters have spoken,” Ralph Schulz, CEO and president of the Nashville Area Chamber of Commerce, said at a subdued gathering of Nashville for Transit supporters at the Adventure Science Center. “But we still have to find that proper (transit) solution. Let’s keep working on it.”

The transit plan, supported by Mayor David Briley after it was first introduced by former Mayor Megan Barry, would have increased the city’s sales tax, hotel-motel tax, business and excise tax, and car rental tax to fund a $5.4 billion transit infrastructure plan. The price tag was $9 billion when factoring in operational, maintenance and other long-term costs.

The proposal called for light rail lines on five corridors, rapid bus on four others, a 1.8-mile underground tunnel and a range of immediate bus upgrades.

At times the transit fight exposed a sharp divide — one between younger Nashvillians flocking to gentrifying neighborhoods closer to downtown who have embraced the idea of transit and others who feel the transit plan went a step too far.

“This is an awesome moment for Nashville,” said jeff obafemi carr, a top organizer for NoTax4Tracks, the main opposition group of the referendum. He chooses to lowercase his name in a gesture of humility; carr is also a candidate for mayor.

“This was a necessary thing to go through, and we appreciate the process that we went through together,” he said.

“What happened is there was a gap in Nashville neighborhoods and leadership downtown. And what happened was people felt left out.”

The measure, most popular among progressives and liberals, failed to gain traction after critics defined the debate by hammering the viability of light rail and cost on taxpayers.

For Briley, the loss could have immediate implications on the special mayoral election set for May 24, where Briley is heavily favored against 12 opponents, all of whom opposed the transit plan. Early voting begins Friday.

Briley, in a statement, pledged to quickly find a consensus on the issue.

“We all can agree that we have to do something about traffic and transportation, but voters didn’t get behind this plan,” Briley said. “My responsibility as mayor is to get back to the drawing board and find the common ground to develop consensus on a new way forward.

“Our transportation problems are not going away; in fact, we know they’re only going to get more challenging as we continue to grow. I’ll get back to work tomorrow on finding a solution for Nashville that we all can agree on.”

Opposition efforts were led by NoTax4Tracks, a group funded by wealthy conservative donors, including automobile dealer Lee Beaman, developer Mark Bloom and others who remained anonymous. They hired Jeff Eller, a former Democratic consultant from Austin, Texas, formerly of Nashville, who usually works with corporations in legal matters.

Critics were pitted against the Nashville for Transit coalition, which pooled funds from heavyweight companies and other chamber allies to hire a long list of prominent consultants, including the powerful public relations firm McNeely, Pigott and Fox, stategist Dave Cooley, Daren Copeland and former Councilman Jerry Maynard.

The transit plan was successfully framed by skeptics as a project that primarily benefited downtown neighborhoods to address a traffic problem that is regional.

Above all, skeptics slammed a proposed 1-cent increase to the local sales tax by 2023, which would have tied Nashville with Chicago for the highest sales tax rate in the country.

“I was in Antioch (on Monday night) and people made clear that, ‘We have quite a lot of people, but we’re not getting much of a benefit from this plan,’ ” Cooper said. “You have to consciously spread the benefits throughout the population and let people in every neighborhood see tangible benefits from their tax increase.”

The transit campaign took an unexpected turn when Barry on Jan. 31 admitted to a nearly two-year affair with her former police bodyguard.

In the weeks that followed, the scandal forced the transit coalition to lose valuable ground to its counterparts. The transit coalition also lost the project’s chief salesperson, Barry, who was polling at greater than 70 percent approval marks before her March 6 resignation.

Barry called the defeat of the referendum a “disappointing setback for better transit options in Nashville.”

“There will never be the perfect silver bullet to improving transportation options, but this plan was the most comprehensive and well rounded that Nashville could offer,” Barry said. “I hope that in the months and years to come, opponents and supporters can coalesce around a revised plan that will keep moving Nashville forward.”

Proponents, including Briley and Barry, argued Nashville needed to act with urgency on mass transit to combat rising traffic congestion and brace for an expected 1 million new people who are projected to move to the region by 2040.

They’ve said waiting to act would only make transit more expensive in the years ahead.

In recent weeks, the Transit for Nashville coalition expanded its message beyond just traffic, arguing the plan would create thousands of jobs, boost health and wellness of residents and offer environmental benefits.

As expected, the plan found greater support among Democrats than Republicans, but resistance from many African-American voters prevented the pro side from building a complete Democratic coalition behind the referendum.

‘A clear rejection of the plan’

Metro Councilman Jeremy Elrod, a top transit ally, expressed disappointment at the transit measure’s defeat, calling the wide margin “a clear rejection of the plan on the ballot on its merits.”

“It really will come down to a breakdown to what voters had to say about it,” he said. “If you look at the history of these issues in other cities, you do have to hit that sweet spot between being too big and too small. So obviously, we’ll look at the scope and magnitude of the program and specific outcomes, whether that would be exit polling or other research that’s done.”

Under state law, the loss means that Nashville must wait at least one year before bringing back a similar referendum to voters.

The Nashville for Transit coalition vastly outspent its opponents, raising nearly $2.9 million for the campaign. It allowed the pro side to flex greater muscle on television with advertising over NoTax4Tracks, which raised about $1.2 million.

But the money from opponents came under fire.

More than three-fourths of campaign dollars raised by NoTax4Tracks came from a single 501(c)(4) organization, Smarter Nashville Inc., which by law does not have to release its donors. Union groups that back the transit plan staged a protest last week with a giant inflatable rat outside Beaman Automotive.

Separately, a political action committee led by Americans for Prosperity, a conservative advocacy group funded by the conservative billionaires David and Charles Koch, contributed a modest sum of $10,000 for mail advertising.

Jason Gonzales and Andy Humbles contributed to this report.