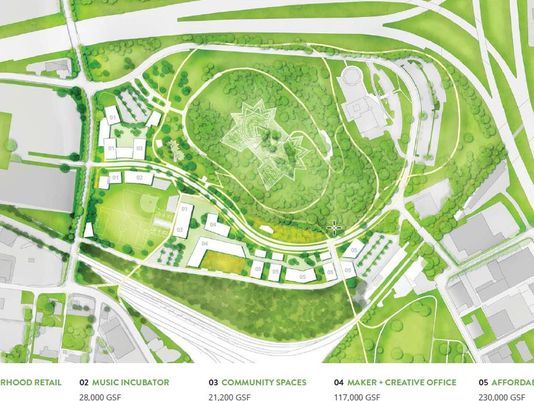 Before the plan to redevelop the Greer Stadium property even materializes as actual legislation, the proposal is receiving pushback from the at-large members of the Metro Council.

At this point, the at-large members say they prefer for the property that previously was home to a minor league baseball stadium to be converted to parkland.

The at-large members say they are especially concerned about tarnishing the historical value of the property. The site was home to an African-American encampment during the Civil War. The federal military base Fort Negley was built adjacent to the land, and that site has already been preserved.

The nonprofit group Friends of Fort Negley and Civil War preservation groups have already announced opposition to the proposed project.

The Cloud Hill plan, a $100 million private development led by prominent developer Bert Mathews and music producer T Bone Burnett, would include 294 units of housing, around 80 set aside as affordable; “neighborhood-scale” market and retail, in addition to a dedicated park, open space and greenways. There also would be a cultural center for artists and musicians offering classes, maker space for artists, including filmmakers and musicians, and performance space.

Earlier this month, Friends of Fort Negley pitched an alternative plan that would maintain the land as green space.

In their letter, the at-large members called for Metro to conduct an archaeological study before redevelopment work begins. This is a stance that also is supported by the Metro Council Minority Caucus.

“If development is to be considered at all, the better course of action would be to commission a proper study to locate the encampment and graveyard,” the at-large members said in their letter.

In a letter responding to the at-large members, Barry defended the plan and asked them to keep an open mind. The council will have to approve any redevelopment plan, and Barry emphasized that the community will have a chance to give input to help shape the project.

In response to the historical value of the property, she pointed out that the land now is home to an unused ballpark that sits in ruin.

Barry said the city has the opportunity to add maker space, affordable housing and park space and still honor and preserve Fort Negley and “the historic contributions of African-Americans to the defense of our nation.”

“I think there is a lot of miscommunication about what is actually being proposed to replace the crumbling and dilapidated Greer stadium — which currently occupies this space,” Barry wrote in her letter Tuesday. “The site which is being considered for park space, green space, affordable housing for working families and maker space is currently covered primarily by an asphalt parking lot and empty baseball stadium.”

The at-large members represent all of Davidson County, instead of a specific neighborhood like a district council member. Barry served two terms as an at-large member before being elected mayor in 2015.

For now, the at-large members say park space is the best plan for the former Greer site.

“In summary, our initial position is that we would prefer to preserve large parks as parks
instead of allowing private development — even under a long-term lease,” they said in their letter. “In this situation, we believe that Nashville should study the impact of further development on the remains of the African American encampment and graveyard before moving forward with potential development.”

The Cloud Hill proposal also has received pushback from the Metro Council Minority Caucus, which discussed the plan at its Monday meeting.

He also said the caucus would like to hear from the Cloud Hill developers, and the plan is for a presentation to take place Aug. 14.

Tom Middleton, a partner in the Cloud Hill development, said the plan is to complete an extensive study of the site before any other work begins. He said the archaeological study has been delayed because the Cloud Hill group’s winning bid is under protest from a competitor.

Middleton touted the firm that Cloud Hill has chosen to lead the work. He also said developers plan to engage an “advisory council of African-American leaders to help us determine the appropriate memorial to honor those who built the fort.”

“African-American history is vitally important. Finding and honoring the graves of the soldiers buried during construction of Fort Negley is a major component of this project,” Middleton said. “It has always been our number one priority, and our proposal includes TRC, a nationally recognized team who bring the most sophisticated technology available to this work.”

Joey Garrison contributed to this story. Reach Nate Rau at nrau@tennessean.com or 615-259-8094 and on Twitter @tnnaterau.