Nashville, TN’s Lower Broadway is getting a new look to improve safety along tourist thoroughfare 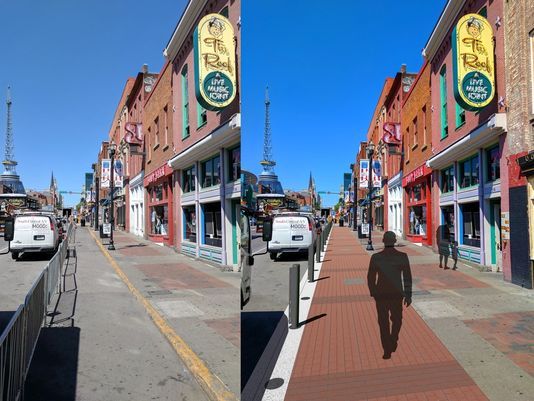 “My office has worked closely with Metro Public Works and the business owners to create a plan to improve pedestrian flow and safety on lower Broadway,” Barry said. “This pilot project between 3rd and 4th will improve the pedestrian experience by widening sidewalks and removing the bicycle barriers. We firmly believe that pedestrian safety is key to achieving our Vision Zero strategy (to eliminate traffic fatalities in Nashville) outlined in my transportation action agenda.”

Currently the sidewalk is about 12 feet and will expand to about 20 feet, Public Works spokeswoman Kelly Brockman said. The loading zone for musicians to drop off instruments and trucks to make deliveries will still be there, she said.

“This is a pilot to see if it will help and work,” Brockman said.

As the city pondered design possibilities, it kept the honky-tonk owners in the loop. An initial design idea called for seating area for bar patrons.

But honky-tonk owners balked at that idea, fearing it could attract panhandlers. In a letter to Barry’s administration, a group of owners said there is already plenty of seating on lower Broadway.

“We’re going to be cutting the curb off and start building directly adjacent to that in a contrasting brick pattern,” Hammond said, adding that the seating concept was scrapped after the feedback from business owners.

The large bollards could still be moved for special events like CMA Fest and July 4 fireworks. If the pilot is well received, the concept could be expanded to other parts of lower Broadway.

The bollards will replace the bike rack fencing that has been on Broadway for about two years. As part of the pilot, Hammond said the department will test a variety of possible materials connecting the bollard posts.

“I appreciate Mayor Barry’s effort to improve the pedestrian experience while being mindful of the concerns of all the merchants,” Brenda Sanderson, who co-owns four downtown honky-tonks, said on Monday after news of the revised plan. “Lower Broad’s uniqueness has made it very successful and we must always be very careful not to fix what isn’t broken.”